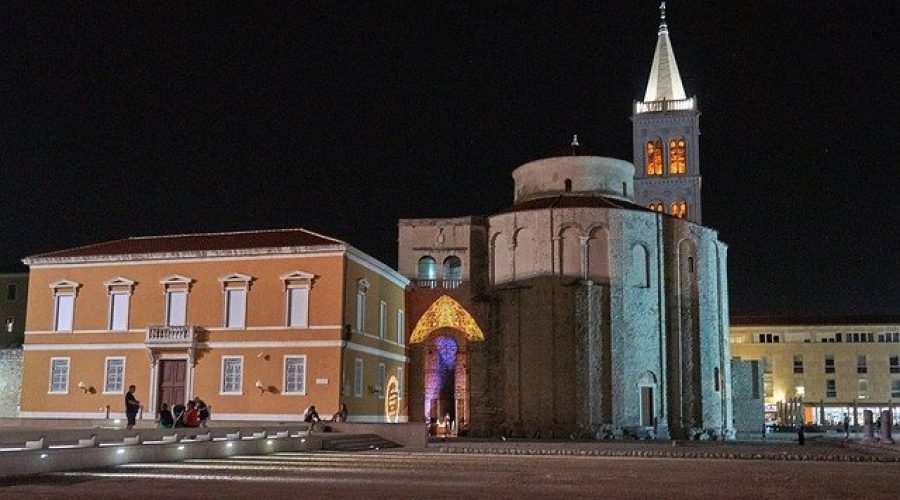 10 Amazing Things to Do in Zadar

Located on a small peninsula, Zadar is a unique mix of trendy bars, good museums and excellent transport links to various nearby islands. The old town is full of wonderful sights for you to explore while its rejuvenated waterfront is the perfect place to kick back and relax; its innovative art installations really make it a unique hangout spot. Fun, friendly and full of life, Zadar has something for everyone to enjoy.

Painted half in bright orange, half in dazzling white, St Simeon’s Church is pretty enough to look at without setting the world alight; visitors invariably stop by to see its fantastic interior. Hanging above the main altar, the wooden sarcophagus of St Simeon is absolutely spell-binding due to its intricate designs, decorations, and inscriptions in silver and gold. A masterpiece of craftsmanship, it was commissioned in 1377 and depicts the childhood, life, and death of the venerable saint. Unbelievably detailed, it is this spectacular sarcophagus that makes St Simeon’s so special to visit.

Home to a fantastic collection that explores a huge range of Roman glassware, the Museum of Ancient Glass is an interesting and educational place to visit with a lot to offer. Located in the stunning Cosmacendi Palace that dates back to 1877, the museum has some awe-inspiring views over Jazine Harbor. Its well thought out exhibits are well worth stopping by. With goblets, cups, vials and more, the displays are delightful to peruse and you can even watch glass-blowing demonstrations. Watching the creation of glassware is a mesmerizing experience and the myriad of objects on display are captivating in their elegance and design.

A beautiful monument, the Land Gate was built in 1573 and heavily resembles a Roman triumphal arch; the Lion of St. Mark is still perched atop it. Long threatened by the Ottomans, Zadar managed to hold out against them due to the impenetrable defenses that the Venetians built. The impressive Land Gate actually commemorates the Holy League’s naval victory over their eastern neighbors. Its renaissance architecture looks splendid and much of the city is still protected by the limestone walls that surround Zadar.

Dating back to the 9th century, the Church of St. Donatus is one of the best-preserved pre-Romanesque churches in the world and is well worth stopping by when you’re in Zadar. One of the most important landmarks in the city, the church is simple yet beautiful and its rounded walls give it a distinctive look. As it has been de-consecrated, the church hasn’t hosted services for over 200 years and it now puts on some scintillating classical concerts as well as some fine exhibitions. Located on the Roman Forum, the Church of St. Donatus was built using some of the rubble and building material from the ruins of the Forum. As such, it perfectly complements the look and feel of its ancient surroundings.

Built between the 1st century BC and the 3rd century AD, Zadar’s Roman Forum is the largest east in Croatia and is situated at the heart of the historic center. Established by Emperor Augustus, a bomb dropped during the Second World War damaged much of the Forum, although it thankfully managed to be somewhat restored in the years following the war. With some lovely ancient foundations and columns for you to explore, visiting the Roman Forum is an interesting experience. There are a number of nice old buildings, such as the Church of St Donatus, that surround the area.

First opened back in 1832, the Archaeological Museum hosts a fantastic collection of ancient artifacts; there are over 100,000 items for you to peruse to your heart’s content. Displaying objects found in the local vicinity, the museum highlights Croatia’s rich history, with Prehistoric, Byzantine and Roman artifacts all on show. Exhibiting everything from weapons and mosaics to ceramics and household items, the museum’s extensive collection is well worth checking out. Among the most interesting items on display are the artifacts that were found in the graves of ancient nobles that date back to the middle ages.

Known in English as ‘People’s Square’, Narodni trg has long been at the center of public life in Zadar. The beautiful square certainly is magnificent to behold, with its fine old buildings and dazzling white flagstones. Dripping in history, the square is home to the impressive clock tower of the City Guard building and the lovely 11th century church of St Lawrence – among others. The City Loggia often hosts some fantastic exhibitions. With art, history, and culture all on offer, Narodni trg has something for everyone to enjoy. The cafes in the square are the perfect place from which to take in all of the sights.

Located on the site of an ancient Christian basilica that dates all the way back to the fourth century, St Anastasia’s Cathedral is absolutely gorgeous, with a lovely Romanesque facade and looming bell-tower. Consecrated in 1117, its interior has some fragments of early-Christian mosaics for you to enjoy, in addition to a wonderful altar and crypt. When visiting the cathedral, a climb to the top of its huge bell-tower is a must; it offers up a stunning view of Zadar. Located right in the historic center of the city, St Anastasia’s Cathedral is one of the most impressive buildings in Zadar.

2. Greeting to the Sun

Looking out over the Adriatic, Zadar’s waterfront is a marvelous place to watch the sun go down. Nikola Basic’s inspired ‘Greeting to the Sun’ installation only adds to the perfect scene. Circular in design, the installation absorbs the sun’s energy during the day and then creates a magical series of whirling patterns and colors as night falls, lighting up the waterfront with its creative and dazzling displays. Embedded in the ground, wandering around the installation is a bewitching experience. The circle depicts the solar system and has the names of the local churches written around it. Located right next to the artist’s other impressive installation, the Greeting to the Sun certainly makes a visit to Zadar’s waterfront an unforgettable experience.

Jutting out into the sea and located right at the tip of the peninsula on which Zadar’s old town is based, the Sea Organ is an amazing art installation that will captivate and enchant visitors. It is a must thing to do when visiting Zadar. Installed in 2005 by Nikola Basic, this unique and distinctive art piece is an organ that is played by the power of the waves. Its 35 organ pipes emit soothing sounds; sitting on the marble steps that border the water is a heavenly experience as the sun dips into the sea at the end of the day. Ingenious in design, the Sea Organ helped breathe new life into the city’s waterfront and is now a very popular hangout spot with tourists and locals alike.

Find the best place for your vacation